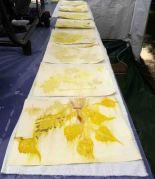 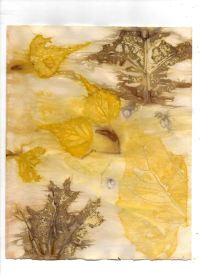 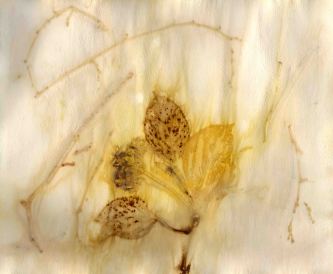 I had to slow down this week to try and let my ankle heal but it’s very hard for me to do.So I did some eco-prints on watercolor paper which are a bit easier to do; that is, you can stand in one place to do them and there’s no wringing out and traipsing back and forth to the clothesline. These were all soaked in alum before printing, but I think leaving them overnight to soak may have been over-much.  Not sure if that’s why they’re soooo yellow.

After laying them out on the paper, this time I tried wrapping them in parchment paper before immersing into the water filled pan and simmering them in the oven for about 20 minutes.  I let them cool in the water and when I removed them I thought it best to remove the wrapping because it was waterlogged, but some mishaps occured as a result.  I wan’t wrap, at least, not so stringently in parchment again.  Maybe had I just wrapped the whole package it might have been fine, but I attempted to wrap them almost separately – too much!

At any rate, I kind of like this one, a small branch of birch leaves, the best.  I lifted these up to peak at them because I was afraid they were too wet after taking them out of the pot and they ran as I did so.  They look as if they’re submerged under water. 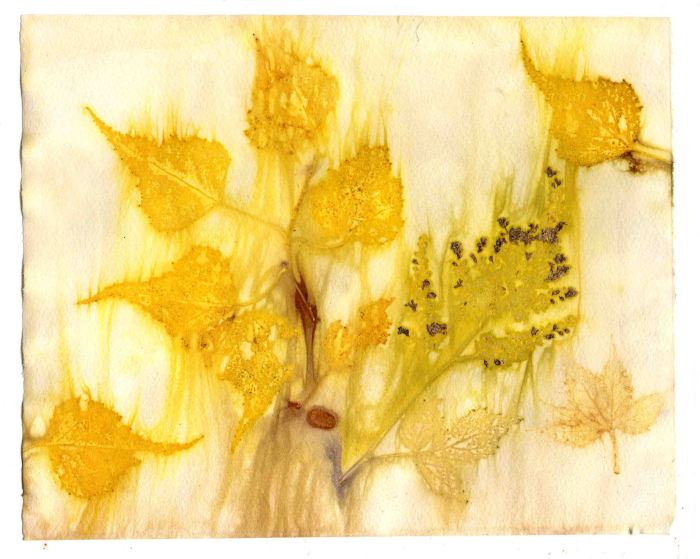 Of course, I had to do some others but most of them are all in a row waiting to be opened!

Check in with Nina Marie this week to see the progress she’s making on her pieced value quilt!  And thanks for stopping  in for the visit!

turtlemoonimpressions The natural world is phenomenal and so much of the man-made world - our architecture, our cities - are stunning accomplishments. They exist hand in hand in both beautiful expressions and sometimes disastrous manifestations. Our entire existence with the natural and the invented is intertwined – each dependent on the other, even as my art evolves, each breathing in the wake of the other. Surface design is one aspect of the process that I love. I thoroughly enjoy the play with color, value and construct, particularly the improvisation which starts with one thing, an idea, a glimpse of a vision, perhaps something that captures my eye for a moment in time and it grows organically. I become focused on whatever piece I'm working on and follow my muse to find my way.
Published June 24, 2016

3 thoughts on “Eco-prints on Watercolor Paper”