So much to do and I seem to live in a time tunnel. It comes and goes. Days meld together as my art does. It plays tricks on me when it simply disappears. Already it’s Friday and we meet again!

I’m working on a Pecha Kucha presentation that I’ll be giving during the two exhibit dates for the Explorations, A Journey in Creativity happening at The New England Quilt Museum in Lowell in two parts. We don’t know yet which group we’ll be in but I’ll be doing the Pecha Kuch at both of them: October 13th and April 6, 2019. I’ll let you know as we get closer to the dates.

It seems like I’m always cleaning and reorganizing…well, I am. It’s part of the process. Setting up for new work eats up the days, scouring fabric, mordanting and otherwise preparing it to take whatever you’re going to do to it n the dye and print process. But I’m also doing some pretty exciting experimenting to take what I’ve been learning and take it to the next level in a far more relaxing way than I’ve been able to do for months.

I really wanted to see if I could make a black dye from Sumac leaves. I knew it was a possibility but I had no idea how so I started to give it a try. At first I got gold, then green/gold and finally I got the black I was after and I’m on a roll!

The first, gold (below left) was so vibrant when wet but, as usual, dried to more muted colors, although in real life it’s more evenly toned silky gold than the grey it appears to be here. It started out as an off-white tannish color, not white.

This Silk was mordanted weeks ago in titanium oxide, I gave it another go in a hybrid of Potassium Aluminum Sulfate, Soda Ash and a bit of leftover Aluminum Acetate. I should have just used the PAS for silk but I didn’t have enough at the moment and this worked just fine. Dunked for less than a minute in warm sumac leaf tannin. I so wanted to get those lines from the string again into my work again so I used no barrier and no wrap with plastic. It was rolled on a copper pipe. 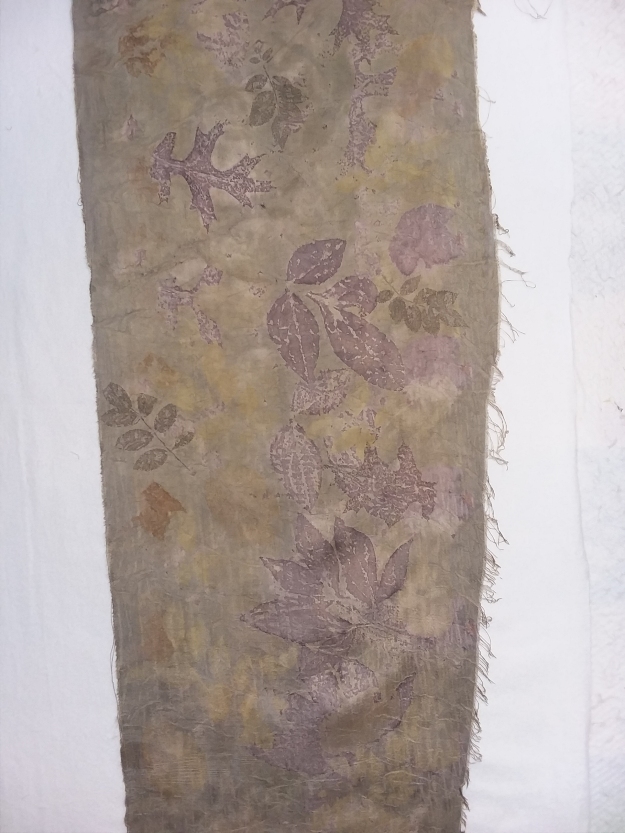 (Above right) You can never see the shimmers of metalics but the color is a shimmery silver/gold green! Same cut of fabric as previous, mordanted in TO and set into the same warm dye pot a bit longer, for about 3 minutes. Also rolled onto a copper pipe without a barrier but the string is tied on before I wrapped it in plastic, so the lines are faintly there throughout but no black edge from being exposed directly to the pipe in water.

Both were simmered in the pot for about an hour and a half, then into a steam pot for another 45 minutes or so and left overnight before opening.

I’ve run out of time – again!  There will be a part two! thanks for reading my blog!

Linking up again with Nina Marie!